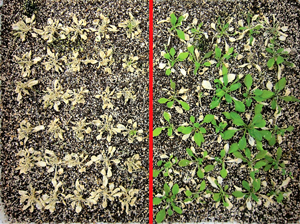 Under environmental stresses such as drought and salinity, plants may experience restricted growth and productivity – stress responses that are mediated by complex molecular signalling networks. An international team of researchers led by Lam-Son Tran and colleagues at the RIKEN Center for Sustainable Resource Science has now identified a previously unknown signalling pathway that plays a key role in stress tolerance.

The newly discovered signalling pathway is based on the hormone strigolactone. The synthesis of strigolactone, and the plant’s response to its presence, is controlled by a gene family known as More Axillary Growth (MAX). The study found that Arabidopsis plants with defective MAX genes were much less resilient to drought and high salinity than wild-type plants (control). Application of artificial strigolactone, however, restored the resistance of low-strigolactone mutants to drought stress and even improved drought resistance in wild-type plants (control).

By examining gene expression in max mutants, the researchers uncovered multiple genetic targets of the strigolactone pathway. The expression of many of these genes was already known to be induced by drought or hormones such as abscisic acid, suggesting that plants integrate multiple hormonal pathways to provide complex and finely tuned responses to stress.

One way that strigolactone acts is by regulating plant transpiration rates. Under drought conditions, max mutants lose water faster than wild-type plants. The research team found that the mutants had more stomata than their wild-type counterparts and their stomata closed more slowly when subjected to abscisic acid. Strigolactone therefore controls both stomatal development and stomatal function.

The team’s research provides a basis for developing genetically modified drought- or salt-tolerant crops by manipulating genes in the strigolactone synthesis and response pathway. Stress-inducible promoters could switch on the strigolactone pathway when plants encounter stress. Thus, under normal growing conditions, the plants could grow without any yield penalty.

There is an intriguing further possibility for growing crops under tough conditions. As pointed out by the research team, the application of artificial strigolactone, although expensive to manufacture at present, could be used to increase tolerance to drought stress as an alternative to developing drought-resistant transgenic crops.